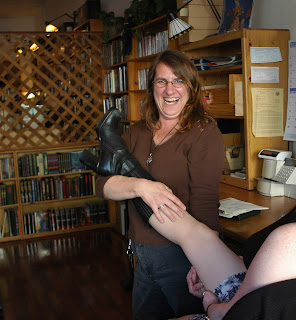 Cary was a bookseller. She had eclectic tastes that probably did not match your own, but she was a pro, who knew how to find just the right book for you. She could nimbly jump from genre to genre… when Borderlands was threatening to close, she gamely started working at a mainstream bookstore over at the Ferry Building. One that catered to the tourist crowd. She knew what they liked. She like to talk about them….  She always liked to talk. Not trash-talk exactly. She was never mean. But she didn’t suffer fools. At all.

She was a beast when it came to dealing with distributors and publishers and returns and orders. She just handled it. For many years, she was the reason the books got on the shelves, week after week.

She had a love hate relationship with computers, and that included the Borderlands computers and inventory database. But again, she could bull through it, and just get the job done. She might let you know how persnickety the computer was being, or how frustrating Baker & Taylor was being, or tell you exactly what the publisher had done to screw up the shipment that needed to arrive the next day for an author event, but all that was just the background music to her day. She would see a pile of work and plow through it until it was done.

She was a true San Franciscan. She drank at The City’s drag-bars and loved the people who made them their home. She prowled the streets of Hayes Valley and The Mission after dark, reading in bars and restaurants and generally being exactly the kind of literate San Francisco hedonist that the city is known and loved for.

When I brought my kids into Borderlands, they would swarm behind the counter, and I would always tell them to listen to Auntie Carey – to ask if they could go back there.  She didn’t particularly like kids, but she took a bit of quiet, perverse delight in being called Auntie. Her chuckle when I would say “Auntie Cary” was always there, and I can hear it now.

I enjoyed having her tell me about what she was reading because her tastes were very different from mine. I always enjoyed listing to what drew her to a particular title, or why a book did or did not work for her. She trusted me, in the way booksellers and other intimates trust each other – to NOT kink-shame each other for their reading habits.  Borderlands was a safe space in that regard, and she helped keep it that way.

When she was having an especially exasperating day, I would hug her, and tell her everything was going to be fine. Usually the computer just needed to be rebooted.
I wish I had hugged her more.